Host: provide user indication that the build token has expired

Added by Brad Buckingham over 6 years ago. Updated over 2 years ago.

While setting up a new development environment, I needed to go through a few iterations on the configuration to get it to the point where I could successfully provision a host. During this process, I created a host in the UI and by the time I had everything set to provision the host, the build token had expired. This led to what appeared to be a provisioning loop. In the production log, there was a 404 on the 'built' request; however, it wasn't really that obvious what the issue was or how to resolve it.

We may want to consider possible solutions to help users that might encounter this scenario. For example,
1. provide some text or indication in the UI that the build token has expired and that the build should be cancelled & initiated to generate a new token
2. might want to re-consider if 60 minutes is a good default for the token, to minimize the frequency of the timeouts, while still providing the security intended
3+. ...

(Note: I was using bootdisk, so I created the host in foreman and then initiated the vm creation from virt-manager).

The following is an example of the error in the logs: 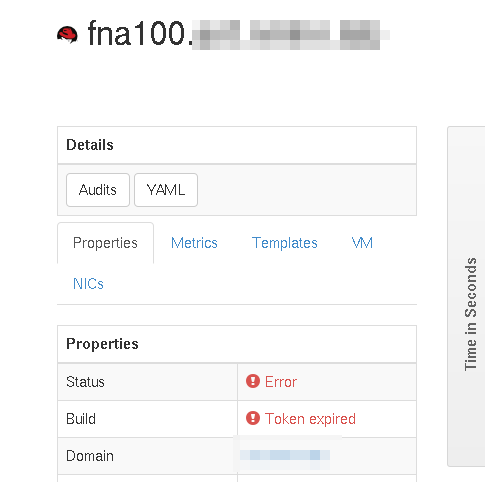 The Global Status introduced in recent Foreman releases makes it easy to
mark the build status as erroneous if the token has expired. This drags
attention to the fact that the host will not be able to mark itself as
built anymore.

Updated by Greg Sutcliffe over 6 years ago

Updated by David Schmitt over 6 years ago

Updated by David Schmitt over 6 years ago

Some more notes from IRC after I hit this problem again.

A few possibilities to go forward on this:

Updated by The Foreman Bot almost 5 years ago

I did use the new "global status" feature to address this ticket.

Updated by Anonymous almost 5 years ago